What is a gender neutral job description?

A gender-neutral job description is one that avoids words that are typically associated with a specific gender, such as “she”, “he”, “her” and “him”.

Gender-neutral job descriptions make it possible for a wider range of applicants to apply for the job.

In Job Description AI, we go beyond the basics and check the gender-coded language in the job description. Our work is based on a study published in March 2011 by Danielle Gaucher and Justin Friesen from the University of Waterloo and Aaron C. Kay from Duke University titled “Evidence That Gendered Wording in Job Advertisements Exists and Sustains Gender Inequality”.  Results indicated that job advertisements for male-dominated areas employed greater masculine wording (i.e., words associated with male stereotypes, such as leader, competitive, dominant) than advertisements within female-dominated areas.

We have implemented words highlighting tool and real time gender bias meter that will update when you replace gender-coded words with gender-neutral words to balance your job description as shown below.

We also highlight the inappropriate words like ninja and rock-star. These words are considered masculine and make the job ad less appealing for women. 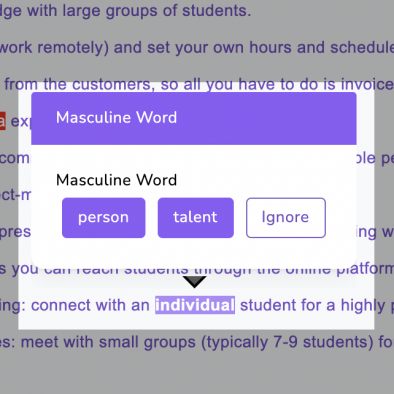 In addition to the gender bias detector tool, we have added an SEO score to check how your job description will perform in search engines.​

The score is based on 5 criteria:

– How To Take Gender Bias Out Of Your Job Ads